There are many reasons why so many people are into shotgun shooting sports. Some do it simply because they love shooting. Others enjoy the competition aspect. Still, others use it as a way to stay sharp until bird hunting season returns. Whatever the reason, shotgun shooting sports are big business. If you’re looking to get into the shooting clays, you need the right equipment. Here we will discuss the best shotguns for shooting skeet, trap & clay.

What are the Shotgun Sports?

There are three different shotgun shooting sports. They are similar, but each has its own rules. Before we talk about sports, you should learn a little about the shooting sport language used. Here are some common phrases in shotgun sports.

Now, on to the shooting sports.

Trapshooting is named, obviously, for the trap machine that throws the birds. In trap, there is one trap house located in front of the shooter. The birds are all thrown traveling away from the shooter at different angles. A trap is usually shot in squads of five shooters, and there are 25 targets per shooter per round.

On the trap field, there are five positions for the shooter to stand, and they get five targets at each standing location. A trap is the oldest of the shotgun sports in the United States and generally considered to be the easiest for new competitors.

Skeet Shooting is similar to trapshooting. However, skeet uses two trap houses, a high house, and a low house. They are located on the left and right of the field. In skeet, birds are thrown across the field from the left to right and right to left at different angles and heights from the ground.

Skeet also incorporates multiple targets at a time, something that trapshooting doesn’t do. Skeet is also shot in squads of five shooters, and the skeet field has eight positions to shoot from. A round is still 25 targets.

Sporting clays is by far the most challenging of the three shotgun sports. It most closely simulates a bird hunting scenario with multiple birds being flushed from multiple locations and traveling in many different directions. Sporting clays take place in a natural setting, such as a field with trees and brush.

There can be up to five shooting locations where birds are thrown in any direction, as well as multiple targets at a time. There are even “rabbit” targets that run along the ground and bounce unpredictably.

With a name like Silver Pigeon, you know it’s going to be good for shooting sports. It comes in your choice of four calibers; 12 ga, 20 ga, 28 ga, and .410. The 686 is an over/under shotgun with American walnut furniture and an ornate laser-etched floral pattern on the receiver. The first thing you see with the Beretta 686 Silver Pigeon is how beautiful it is.

It comes in multiple barrel lengths to suit every shooter. When you pick it up, it feels perfectly balanced, something that’s important in shotgun sport shooting.

Browning has a reputation for making some of the most reliable firearms on the market. This tank of a gun isn’t going anywhere near the backwoods, but it could. Instead, it’s designed with the trap and skeet fields in mind.

The Browning Citori 725 has some serious features, as well. It has an adjustable comb piece, ported barrels, extended choke tubes, and an adjustable Pro Balance system that allows for custom balancing.

The Browning Citori would fit right in at any exclusive shooting club, with its beautiful walnut stock and gold-enhanced engravings.

When you talk about Browning, you’re talking about one of the very best. It has a price tag to match, costing more than $3,000 at most retailers.

The Model 101 is a 12 gauge over/under style shotgun with a comfortable grip and weight perfectly designed for all-day shooting. One feature that it does come with is a Pachmayr Decelerator recoil pad that comes standard. Another feature that will encourage you to shoot longer. At around $1,600, the Winchester is an affordable alternative to the more expensive Beretta and Browning options.

For those who aren’t quite sure if they want to fully commit to a $1,000+ deluxe shotgun, there’s always the most popular shotgun ever made. The Remington 870 is the best-selling shotgun of all time, and the Express Trap model delivers characteristics you look for in a sport shooting gun for a fraction of the price of others.

The 870 you know and love has been transformed into a sport shooting shotgun by the addition of some simple features like a metal mid bead, ivory front target sights, and a Monte Carlo stock, which has a higher comb to naturally raise the point of impact.

Pump-action shotguns are not as quick as semi-automatic or double-barrel shotguns, this is true. But the Remington 870 has such a smooth, quick action that you will hardly notice.

We couldn’t talk about the best shotguns for shooting skeet, trap or Clay without talking about chokes. For those who are new to shotguns, a choke is an accessory that you add to the end of your barrel that restricts the spread of the shot. Here are some of the best chokes available for shotgun sport shooting.

This is a full choke that fits many of the most common 12 gauge shotguns such as Mossberg, Browning, and Winchester. It features: 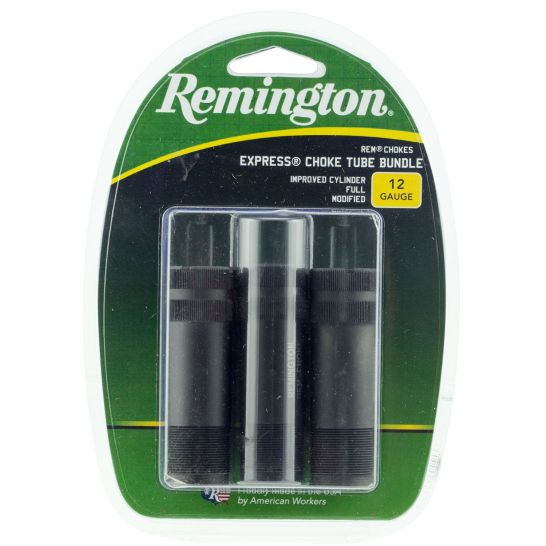 This tube is specially designed for Berettas and Benellis, and comes in six different variations: full, improved cylinder, improved modified, skeet, and extra-full. It features: