I’m always on the lookout for new equipment, so when a friend offered me the opportunity to shoot a Low Power Variable Optic (LPVO) that wasn’t on the market yet, I jumped at the chance. A few days later a package arrived at my house, and I got my first look at the AT3 Tactical Red Tail 1-6x24mm LPVO. BTW, this scope is now on the market.  Here is a link to purchase the AT3

My initial thought of the AT3 Tactical Red Tail out of the box was that it was a well-built, quality optic. I’ve shot expensive Leupold optics and I’ve shot cheap [NAME WITHHELD] optics, and the AT3 Red Tail has the look and feel of a well-made piece of equipment. With that, let’s get to the review.

LPVOs do an excellent job bridging the gap between traditional hunting scopes and red dot optics. They are popular with AR-15 shooters because they can be used at 1x power in the same manner as a red dot optic for rapid close-range target acquisition (with both eyes open).

They also magnify (this one up to 6x) to easily reach targets up to the AR-15s maximum effective range of 500-600 yards. Magnification greater than that would be overkill for an AR-15.

What I Love About The AT3 Tactical Red Tail LPVO

Arguably the most important part of an optic is the reticle. A good reticle can make all the difference, and the Red Tail has a good one.

The outer ring is 68 MOA, perfect for rapid close-range target acquisition at 1x power. Inside the ring is a chevron. The chevron is your aiming point for targets from 100 – 300 yards. For targets from 400 – 600 yards, there is a bullet drop compensation reticle below the chevron that allows you to adjust your aim for longer shots.

The knob that controls the reticle illumination is the same size and shape as the windage and elevation knobs, located on the left side of the tube. The reticle is powered by one CR 2032 battery. (The packaging says that one is included, but there was no battery in mine.) There are 11 brightness settings, plus “0” or off.

When in the off position, the reticle is still visible but is black instead of red. When we zeroed our scopes, it was late morning and the sun was bright. I found that I preferred to shoot with the illumination off using the black reticle, which was very easy to see on a bright day. On a cloudy day or in low light situations, or shooting at a dark background, the illuminated reticle would be a necessity. 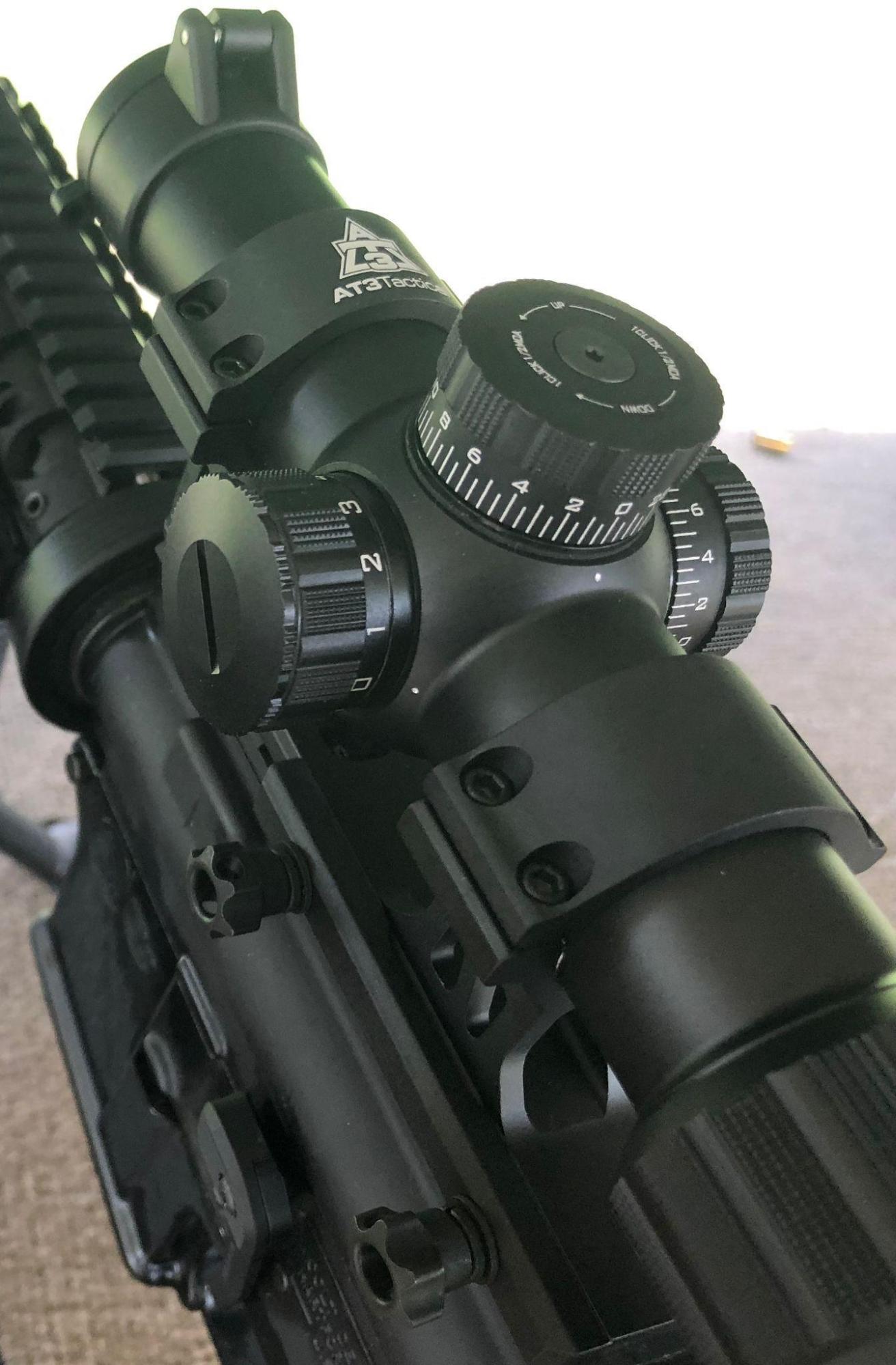 The windage and elevation knobs provide good feedback when turned with a firm “click” each turn. Each turn of the knob is ½ MOA of adjustment. That means that at 100 yards, one click will move your point of impact ½ of an inch either up, down, left, or right.

The instructions are written clearly on the knobs so that even a beginner should have no trouble zeroing the optic.

The Red Tail also comes with AT3 branded flip-up lens covers for both the front and rear lenses. This may seem like a little addition, but they are very nice and help keep the glass clean and safe when not in use.

Staying on the subject of windage and elevation, zeroing the AT3 Tactical Red Tail couldn’t be easier. I have the benefit of years of military training, but even a beginner could pick up this LPVO and zero it within minutes.

As long as you keep in mind that you make adjustments in order to move your point of impact, you can follow the directions printed on the windage and elevation knobs.

I zeroed my Red Tail at 50 yards instead of the normal 25 yards because that’s what my local range had available. My first six shots were high right.

Each click of adjustment is ½ MOA or ½ inch of movement at 100 yards. So at 50 yards, each click moved my point of impact 1/4”. My first adjustment was eight clicks down.

That took me too far left, so I adjusted back two clicks right, and four clicks down. That put my next three shots directly inside the “10” ring, touching the white bullseye. Pretty simple.

The expected accuracy from an AR-15 is about 2 MOA. That means a two-inch group at 100 yards. I was an expert marksman in the Army, but I’m by no means a sniper. If you throw out the three “flyers” (the poor shots in the white), my group was about 4 MOA.

Certainly not horrible, but not as good as I expect myself to be. (This reflects completely on me and in no way on the AT3 Tactical Red Tail.)

In my own defense, this was my first time shooting my AR-15 at a 100 yard target in over two years, and my first time on a new range. But I digress.

Battery notwithstanding, the AT3 Tactical Red Tail comes ready to use straight out of the box thanks to the included AT3 Tactical 30mm Cantilever Scope Mount. The mount is the same high quality as the scope and comes pre-attached. Mine was just slightly crooked, but after a few twists of the included Allen wrench, I had it set up exactly how I wanted it.

The “cantilever” design allows for the scope to be positioned further forward on the gun while still utilizing the top Picatinny rail. This provides for better eye relief and quicker target acquisition.

AT3 Tactical stands behind their products and will repair or replace any manufacturer defect for the life of the optic. The transferable warranty means that even if you didn’t purchase the optic brand new, you still qualify for warranty service.

The removable throw lever included in the AT3 Tactical Red Tail is bright red, which is a nice touch. It screws directly into the dial to allow easier manipulation of the magnification.

What I Don’t Love About The AT3 Tactical Red Tail

It was hard for me to find things that I don’t love about The AT3 Tactical Red Tail. There were no glaring examples of something that could have been made better. I feel that I’m nitpicking with the two items I’m listing here.

I honestly feel like this was an honest mistake because I received a pre-sale example and not one that was destined for store shelves. When I received mine, I went to the AT3 Tactical website to get some background information on it, and the Red Tail isn’t even listed on their website yet.

I’m going to give them the benefit of the doubt and hope that the problem is noticed and fixed before the Red Tail goes on sale to the public. A new CR 2032 battery costs about $2.00, so it didn’t break the bank buying my own.

There’s nothing wrong with the screws that hold the scope mount on the Picatinny rail. I just think that they could be a little bit better. They have a pokey, pointy feel to them, and when I was tightening them they hurt my fingers. Again, this is nitpicking.

The AT3 Tactical Red Tail 1-6x24mm LPVO has everything you’re looking for in a Low Power Variable Optic for an AR-15. Includes a great illuminated reticle. It has easy-to-use windage and elevation knobs.

It has a cantilever scope mount included at no extra charge. Plus, it has a removable throw lever. The Red Tail is a high-quality LPVO that will be reliable for years to come.

Adam Zimmerman has been a freelance writer for several years, mainly on the topics of guns, the U.S. Military, and politics. He spent 17 years on active duty in the U.S. Army where he was a military policeman, paratrooper, and Drill Sergeant, among many other assignments. He deployed to both Iraq and Afghanistan where he earned commendations for valor in direct combat.
Adam and his wife Danielle have twin boys named Adam, Jr (AJ) and Austin. They live in Frisco, Texas. Adam is a graduate of the University of North Texas with a Bachelor of Arts in History.